Roller-coaster and hiking in the Alps, France 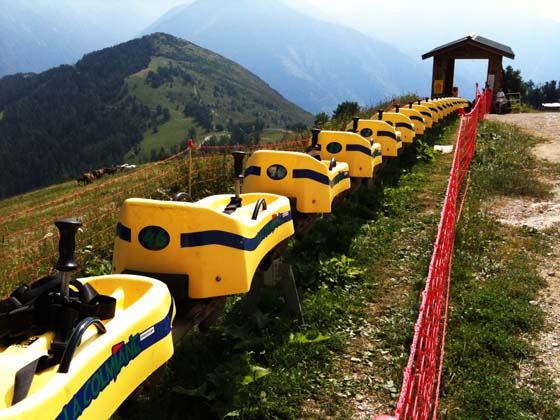 Valdeblore is a district in the French Alps made of a ski resort named La Colmiane and four small villages Saint-Dalmas, La Roche, La Bolline and Molli?res.

Rimplas is another nearby village that is its own district.

The area is an absolute gem nested in the French Alps, a little paradise just a short distance away from the French Riviera with unparalleled air quality and peacefulness.

Outdoor activities are countless, ranging from lying down in the sun, enjoying the fresh and pure air of the Alps, to short hikes along the quite roads and trails, to more serious hiking in the nearby Mercantour. Mountain biking, paragliding, snowboarding and skying in winter, rock climbing and its Via Ferrata are some of other activities many come to enjoy.

A recent addition is the alpine roller-coaster, named locally 'luge d'été', built on the slopes used in winter at the ski resort of La Colmiane.


Alpine Roller-Coaster
It is curiously not so well advertised in the valley but it's really worth the trip. A ticket for one ride is quite expensive but booklets of rides offering a discount can be bought at the booth down the hill.

Each individual car of the ride is quite simple, a seat, a seatbelt and a stick to control the speed. Pushing forward leads to the maximum speed while pulling on the stick activates the brakes.

There's a second seatbelt to strap a young kid on an adult's lap. That's it, no waiver to sign, no deposit, no paperwork.

The slope is the one being used in winter by skiers and snowboarders. It's apparently the longest ride in the French Alps. I like to think it is the highest roller-coaster in the world, avoiding the need to fly to some Six Flags Magic Mountain park in America.
I was told that some bigger rides have already been built in the Swiss Alps. The concept is the ultimate roller-coaster.

Cars in line at the top of the ride 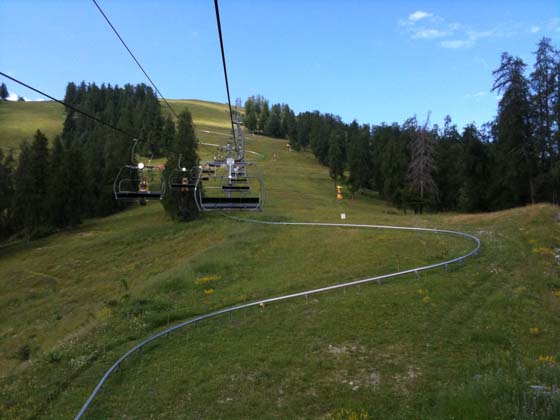 Ski lift to reach the top of the roller coaster 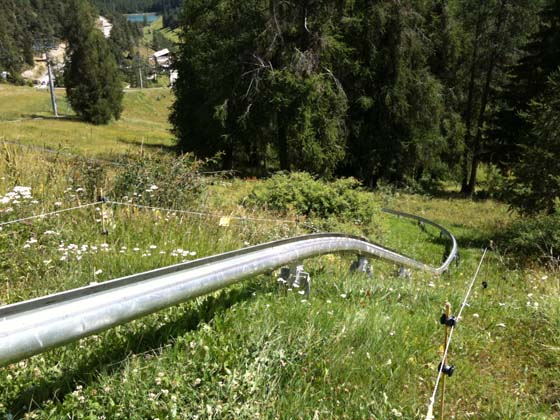 One of the tightest turns down the thrillride

Some of the tight turns like the one below are quite impressive but pushing the stick forward to the maximum will never make the car reach any kind of unsafe seed.
I was told that it's all been correctly engineered. 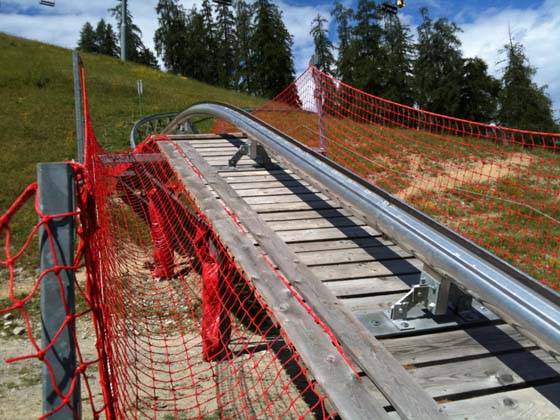 Find below a video I shot with my iPhone while also holding my kid next to me with the other hand. The shots are not super stable but you'll get the idea.
An absolute thrill ride that is really worth the expense and the trip.


Down the hill in La Colmiane there are many other outdoor activities for young kids and adults. One of the best is to simply lie down on the grass by the lake and enjoy the splendid view on the Mercantour mountains with the Argentera and the Gelas.
The peacefulness of the surroundings is quite unique. 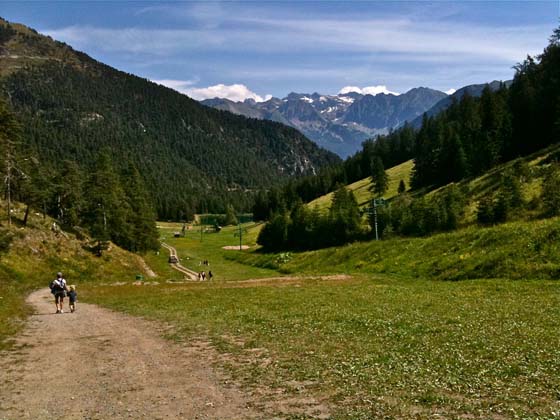 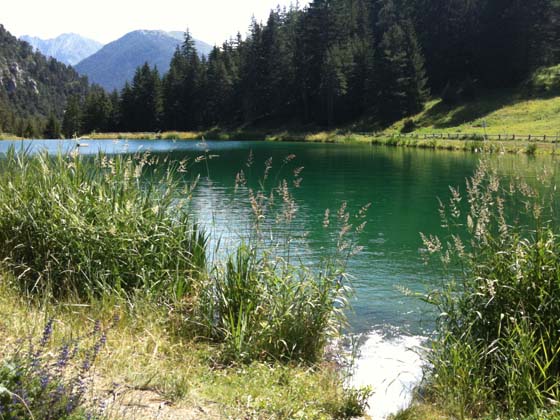 
Rimplas
Rimplas is a small village of roughly a hundred souls right outside the district of Valdeblore. It's made of a group of houses perched on the ridge above the valley at an altitude of 1000 meters.
The view from there on the Valdeblore villages and the valley is spectacular. It's a very quite place, that's a sure thing and only a short driving distance from La Bolline and Saint-Dalmas for grocery shopping.
There is a hotel and also a restaurant, Le Pous-Café that also acts like the only local grocery store. 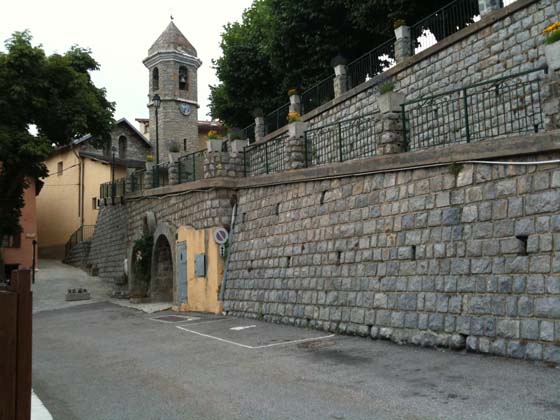 It looks like the houses in the village are in better condition and better maintained than they used to be. There's also more activity most likely thanks to the local high school built in La Bolline, which must help families to stay away or move out from the crowded big cities down the coast. 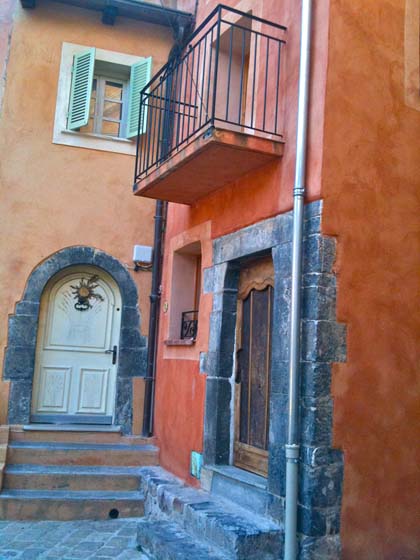 Very cute house in the streets of the village 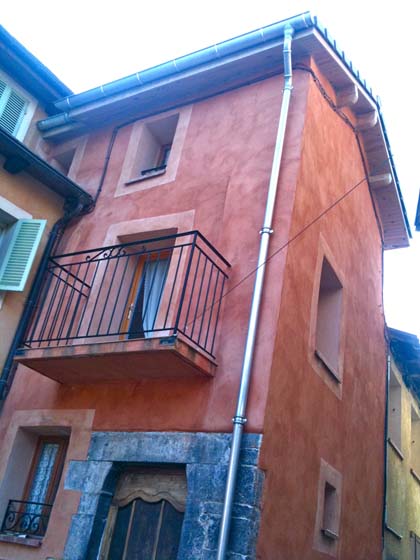 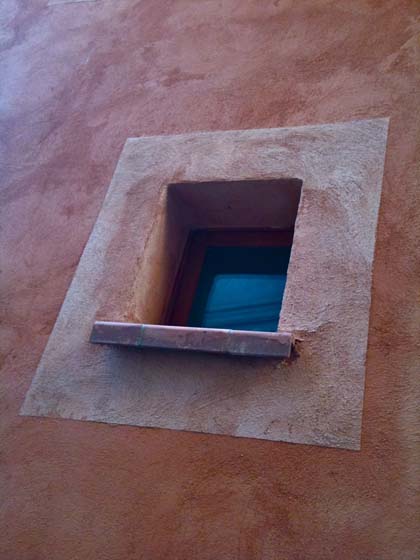 If you happen to visit Rimplas, I definitely recommend a stop at Le Pous-Café. The decoration and ambiance are great. The food is very good, the owners are very welcoming and accommodating and the prices are very reasonable. I am pretty sure that the next time I visit the village I will eat there more often and save time on grocery shopping down the valley.
They also manage the tiny grocery store next door, the only one in the village. You will not be able to shop here daily but if you look for a last minute item for your meal, you might very find it here.
Also, if you order a baguette early enough, they can get it for you from the bakery in La Bolline. 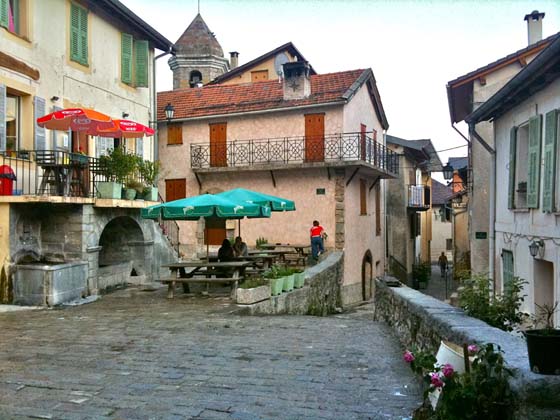 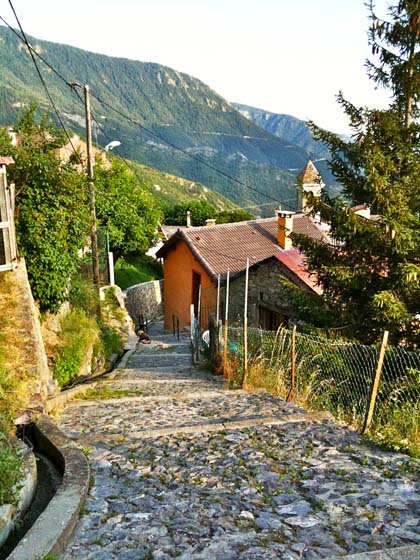 A cute paved pedestrian street down the village

During the season, hunting is quite developed among the locals. I thought this sign was quite unique and was worth the picture. It says 'Skins, heads and guts have to be thrown away at the old garbage dump (without plastic bag) at the beginning of the trail. Forbidden in trashcans inside the village. The hunting society.' 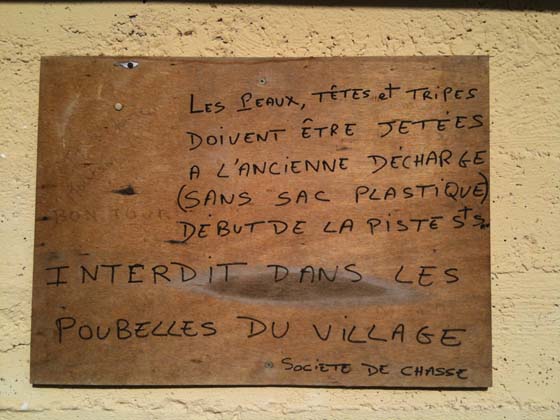 A message from the local hunting society

Like in many villages, cats can quickly become a problem as they breed freely without any real control from the humans who originally brought them in.
And without proper financing from the municipality, advising citizens is the way to go to educate and avoid costly solutions to the problem.
This sign is quite informative and the data are pretty astounding. It says 'Have your cats sterilized. Within four years, a couple of cats can lead to a population of 20 736 cats. Think about it today!' 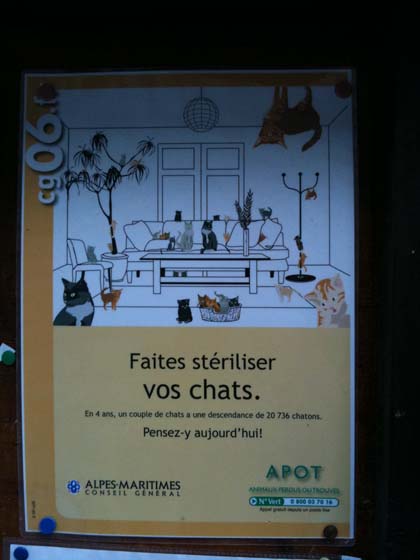 Message from the Conseil General


Dog Rose Bedeguar - Bédégar de l'églantier
While hiking around the village, if you pay attention you'll find this kind of situation quite often.
A bedeguar also spelled bedegar (or bédégar in French) is a gall that looks like a soft and hairy little spongy bush like the one shown on the picture below. 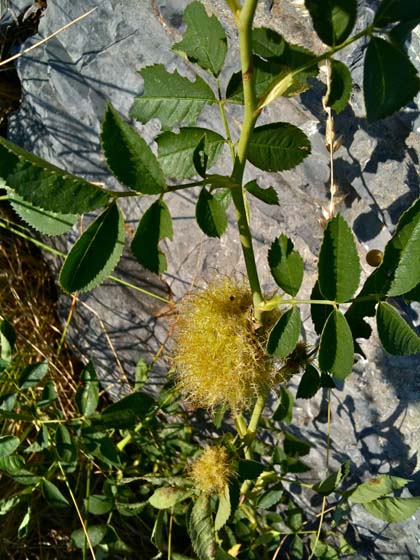 Dog Rose Bedeguar gall caused by a cynips, the Diplolepis rosae
Dog Rose (Rosa canina) is known as the églantier in France

A bedeguar is an abnormal local growth of the plant, here a Dog Rose, triggered by the intrusion of an insect, in our case a cynips called Diplolepis rosae, also known as Rhodites rosae.

This cynips is a small insect that looks like a tiny wasp of the order Hymenoptera. Hymenopteran females are equipped with an ovipositor that can also be a stinger, and it certainly looks like one, but its primary purpose is not to sting. It is a long piercing organ used to drill a hole into a hosts body and then precisely lay down eggs inside the space prepared to that effect. Not all ovipositors are stingers but when they are, a poison is injected into the host to paralyze the insects prey so that eggs can be laid inside it peacefully.

The actual detail of the interaction between the cynips and the plant that triggers the growth of this abnormality is still unclear. It is as if the insect were modifying the genetic material of its host so that the bedeguar can grow as the larva grows, feeding the larva at the same time it provides a safe nest for its development.

Mother nature always has some quite impressive tricks in reserve to always amaze us.


Hiking above the village
It is virtually impossible to get bored while living around here. The possibilities for outdoor activities are just endless. The perfect recipe to stay in excellent shape and in a perfect mood. The recipe worked quite well for the oldest man in the village who will soon turn a hundred.
Just a short hike above the village offers breathtaking views on the valley below and even the Mediterranean Sea if you get high enough in altitude.
We hiked to the water reservoir used by the fire department in case of emergency. Helicopters can simply fly over to pump the water into their tanks.
It was tempting to soak our feet inside this private pool but the icy cold temperature of the water made it quite challenging. 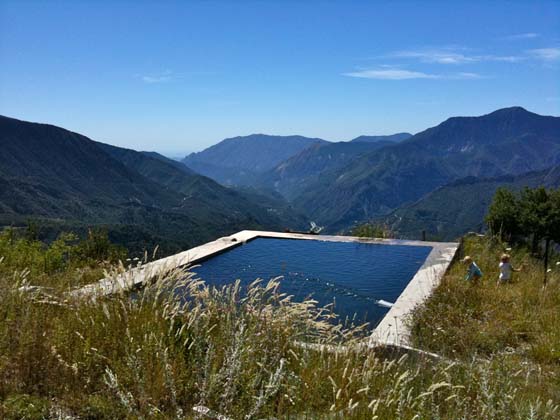 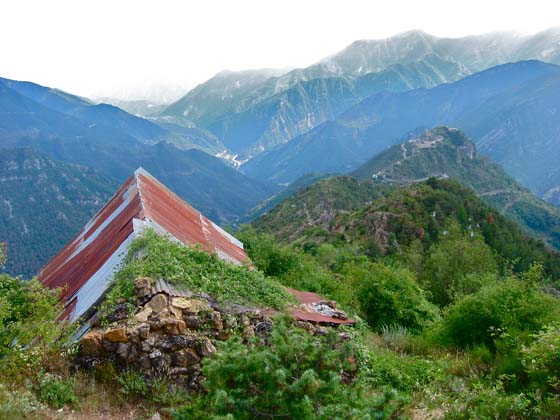 View of Rimplas from the trail to the reservoir

Further away from the village and way higher up in altitude is the trail that leads to the lakes of Millefonts at roughly 2400 meters in altitude. A must do if you like altitude and the vegetation that comes with it. We spotted a group of Chamois playing and sliding down the snow further away from us, too far away for my small point and shoot camera to snap them.
The flowers were small and just gorgeous. Below, find a few of them like these white flowers that smelled quite good without even having to bend over and get close to the ground.
I don't know the name of these little guys but they are typical of the higher grounds when you hike in the Alps. 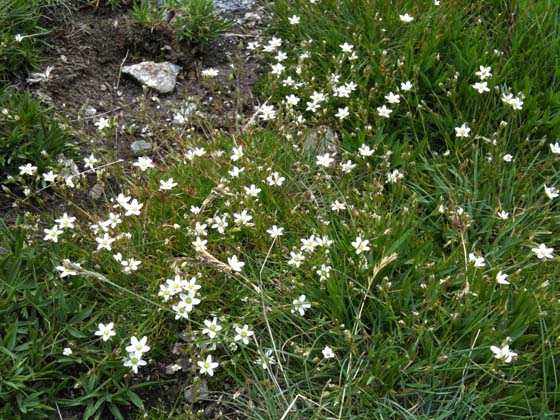 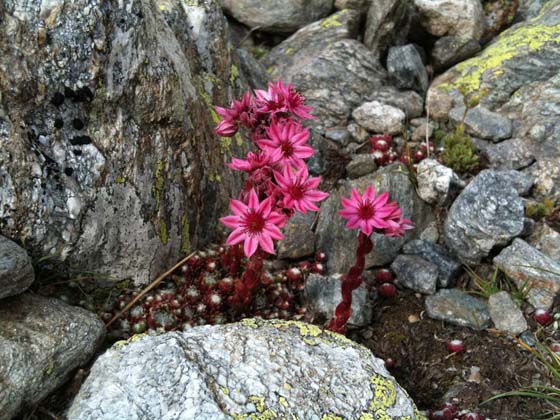 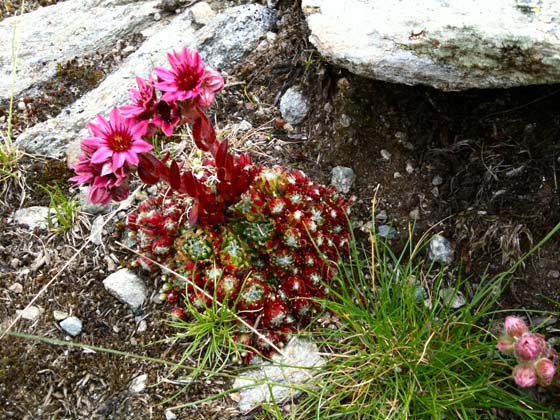 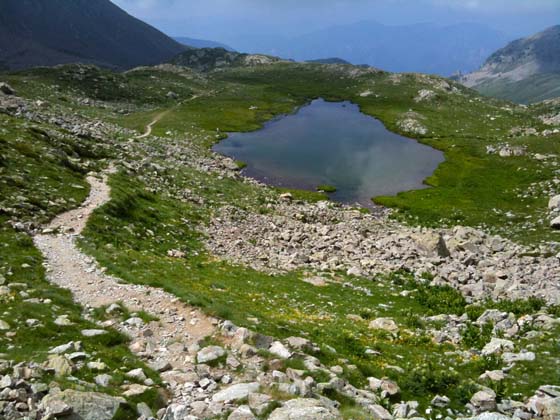 Lac Long
one of the lakes in
Lacs des Millefonts 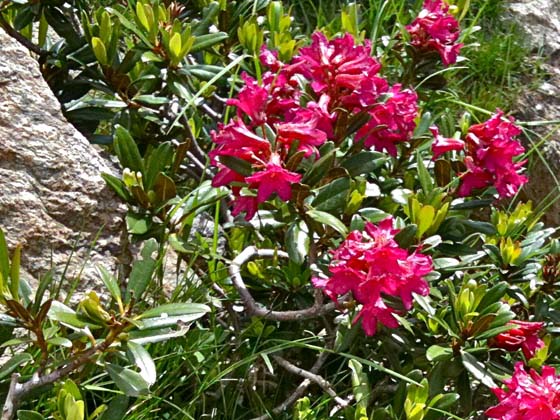 Rhododendron Ferrugineux
typically grows above the tree line in the Alps

When you spot Rhododendrons growing in the Alps that means you have reached the tree line. The altitude is quite right for trees to stop growing, leaving the room for the short grass and smaller plants to grow.

When you're there, it really feels like you're in heaven.

Your pics are excellent, makes me want to go there next summer.
The luge looks awesome. How much was it per trip?
Ed

Thank you for your article on the Pous Café.
By hoping to see again you this summer in Rimplas!
Good continuation !
Elodie from the Pous Café